What better way to spend a National Holiday then with a little lawn work?  That's the plan for today.  I may even get out my... chainsaw.  It'll be too warm (mid 70's F) to dress up in my lumberjack gear so I'll most likely be wearing my summer garb:  shorts & a T-shirt.
Yesterday was a lazy day.  I did ride 7.7 miles in order to get past the 55 miles per week I need to hit my goal of 2500 miles this year.  I also printed off the first chapter of The Body in the Loch.  Very interesting.  I researching Scottish Gaelic in order to spice up the conversations.  Did you now that in Scotland gorse is called whin?  And you can eat the flowers, but the pods are poisonous.
So, Biden said something rather foolish during an interview last week, something about 'if you're black and you vote for the Idiot Jerk in the White House you're not really black.'  He later apologized.  Me?  I'll be honest, I don't know any black people who are voting for the Idiot Jerk, except Clarence Thomas and Ben Carson, and I'll be honest, I don't really know them.  And I know they are both very darkly complected, but does that make them black?  There is a difference, you know.  It's like saying the complaints of sexual harassment by all women are sanctified... until a Tara Reade shows up.  All of a sudden there's a bit of an issue.  The fact that both Thomas and Carson, in both their words and actions, call into question their own self-identity.  Think of it as being similar to a gender issue, if you wish.  Both were born male, but in their heads the identify as something other than male, they were born black, but identify as something else.  I bring this up because the Idiot Jerk's re-election campaign is attempting to turn Biden's words into a divisive hatchet job against Democrats, while at the same time he posted something derogatory about Stacey Abrams.  As I've said before, they will throw as much shit against the wall as possible desperately hoping some of it will stick.  This November, we need to do more than just vote him out of the White House, we need to overwhelmingly cancel his ugly reality show.  American needs to fire this loser so badly his empty head will spin for the rest of his life.
Finally, I've switched to Cremo for shaving.  I'm sure that just wows the heck out of so many of you.  It's a cream and comes in a tube.  When I took the cap off to remove the seal, I found this cute little collar.  It's a nice merchandising technique.  In fact, the first words I read were 'Hey there, handsome.' 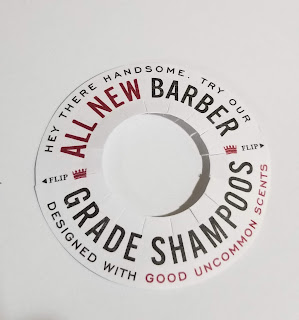