Yesterday was... ordinary.  Yeah, that's kind of the word I need to use.  Chewey.com delivered my big bag of dog food, 45 pounds is heavy.  I also had some new earbuds delivered, that was kind of exciting.  I've been using a set of Senso earbuds for years,  A few months back they began having problems with their bluetooth connection, they'd connect... and then they'd disconnect.  So I ordered myself a new pair.  Jabra.  They're red and copper.  Very nice, and the sound is super. 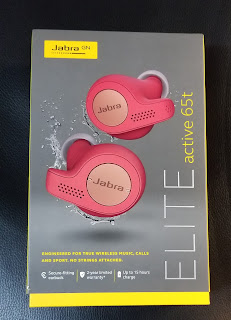 I didn't get any miles in because... well, I had to set up the ear buds.  See what I mean about yesterday, it was ordinary.
The Idiot Jerk in the White House is planning on signing some sort of phony Executive Order today regarding Social Media.  Over 100,000 dead from Covid - 19 (and that's a conservative estimate) and he's pissed because Twitter fact checked his ass.  From what I've read, this order will begin to open up Social Media to.... wait for it.... are you waiting?... Lawsuits.  That's right.  Our tinfoil dictator wants to be able to sue Twitter for fact checking his lies.  The root of his complaint is that Social Media has always been anti-conservative.  I guess that's true for those Conservatives only who traffic in lies and conspiracy theories.
Yesterday a supermarket in Carlisle, our County Seat, shut down because one of the employees tested positive to Covid - 19.  This was big news.  They're going to have a professional decontamination unit come in and clean down the place.  The same thing is not true for our Pennsylvania Republican Legislature.  One of their members, a Republican bag named Lewis self quarantined.  Nothing was said the Democratic Representatives.  This is the evil we've come to expect from Republicans.
And as expected, the Idiot Jerk in the White House is beginning to lose his base.  White women aren't even getting closer enough to touch him with a stick.  Educated white men are finally using their years of study to deduce the loser they voted for is nothing more than a scumbag from hell.  Evangelicals are slowly beginning to peel away, though not the Pro-Lifers; they will accept and bow to any evil that gives them what they want.
Finally, my new schedule is out.  Beginning 6/15 I'm back to my 40 hours a week.  Unless something happens, like one of our associates gets infected and they have to shut us down....
Posted by Dave R at 6:37 AM