For those of you stuck inside your homes, it's the beginning of the work week... also known as Monday.  This is 6th out of 7 days in a row.  Were I working full, 8 hour days I'd be getting testy.  Right now, my full time schedule doesn't kick in until May 19.  I am not so excited.  Still, I'm healthy and somewhat fit, so why not pound money into the bank account?
I'm not going to ride the bicycle this afternoon.  Yesterday was the 6th day in a row.  I'm averaging  65 + miles per week.  Not bad.  It's time to give the legs a little break.  Just a little one though, I need to pick up the pace a little if I want to get 2500 miles in this year.
I saw where the Idiot Jerk in the White House has now up the casualty count to as many as 100,000, and again he's blaming the Chinese.  Very, very Republican.  Look for a scapegoat.  Of course, he's stupid.  I don't think he comprehends how many times he's on the record denying the seriousness of Covid19.  He thought a possible pandemic was unimportant.  I find it truly insulting for him to now say that even "one life is too many."  This is what happens when he reads a script written by someone who knows he's going to lose his bid for re-election.  See how much his phony sympathy will be run over as he races to hist first rallies with his MAGA head supporters.  America know this.  The majority of voters know a charlatan when they see one.
And what about that hussy Tara Reade abruptly cancelling her interview on Fox?  Did I spell her last name correctly?  I can't be certain.  She's had several aliases through the years.  I guess the name depends upon the role she's playing.  An opinion writer for the NYT who was trying to legitimize her complaints was soundly trashed by over 3500 comments, mostly by women.  As my friend Betsy says, 27 years ago, if Tara was wondering the halls of Congress without wearing pantyhose she was on the hunt.  Me?  I don't know about pantyhose.  That's something I never would have thought of.
Finally, I thought I'd let you know what Glen was supposed to be. 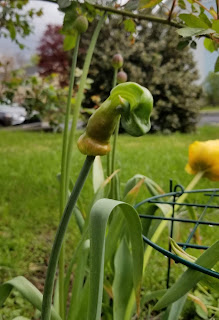