Books Are the Order of the Day

Thursday, and I'm the only flooring specialist on the schedule today.  This means if you want to buy anything after 4:30 PM you're going to be dealing with the aisle maintenance people.
How about little old Nancy Pelosi shoving her shiny, little pump up the Idiot Jerk's ass yesterday?  Security, you know?  "Let's hold off on the State of the Union," she said, twisting her sharp, tiny heel to the left.  Kristjen N from Homeland Security fired back saying "no, no, no," without understanding how much she sounded like Mr. Bill.... remember Mr. Bill?

Mike Pence's wife got a job at a phony Christian School where the focus is on Passing Judgement.  I checked, she does have experience teaching art... in elementary school so it's not like this was just a blatant political move to shore up the Crazy Christian base.  But let's be honest here, the only voters Pence can count on when he runs for President are the Crazy Christians.  Funny, isn't it?  This is a group so craven for power, for the ability to Pass Judgement, they don't realize they are sinning themselves straight to hell.  No one said they were smart since they evidently seem to be following the playbook they stole from "Mr. Bill's Almost Devout" book on Theology.
I was talking to Cori yesterday about the artwork for the next book.  She did the cover for "The Body on the Lawn."  To be honest, she wasn't that impressed about that one, though everybody seemed to like it.  She said "It's just some woman standing in front of a Cadillac."  "Oh," she said, I get to play around with a little more joie de mort."  I had printed off a number of pictures and given them to her, like this one: 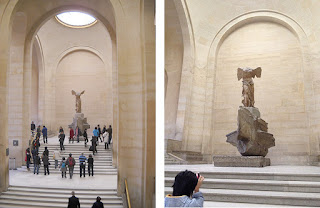 It's actually not as large as it seems in the pictures.  The first time I stood in front of it I had to pause because I thought it was going to be gigantic.  It isn't.  And in spite of the low hum of voices, I have to say the mood around the display is very quite, people feel muted in the presence of something so great.  Quiet rules constantly... except for that afternoon during the Tour de France when something... unpleasant... took place on the staircase leading down from Winged Victory.