The Travel Agent From Hell

First off, for those who are interested, my desk arrives on Tuesday.  Delivery will be between 11 and 2.  It's made of solid wood so hopefully I won't have to treat it like hardwood flooring and let it acclimatize for 3 days before using it... just kidding.
The archway is patched and painted, smooth, but not drywall smooth.  It'll do for me.  Back 114 years ago, there was no arch, just a regular door.  At some point someone ripped out the door and put in the arch which is over 6 feet wide.  Nice.
I guess the Idiot Jerk in the White House is going to make some sort of silly statement today... when the northeast region of the country is under a Winter Storm Warning.  No, he's not going to volunteer to come shovel your walks clean.  That's manual labor.  He'd have to use muscles.  You know?  Like minimalist cardio?  And we all know the only exercise he gets is walking to the bathroom to piss away all the diet coke.  This means he's going to start caving, giving the Democrats some of the things they want as long as he gets his wall.  He's getting desperate.  The shutdown is making both he and his party look bad.  And Nancy's not going to let him lie for 90 minutes in a State of the Union lie fest.
What we're beginning to see as this thing drags out is more and more commentary on the Idiot Jerk's inability to make a deal.  What we've seen is a man who throws temper tantrums and, slamming his hands on a table, storms out of rooms.  In his mind, this is a negotiating tactic.  And people are  beginning to make fun of him.  This AM I read this on NBC News where they called him the Travel Agent from Hell.  Believe me, this almost had me in stitches because in the Real World the Idiot Jerk is petty as a two bit whore, of course that is where his sexual tastes seem to run so none of us should be surprised.  He's nothing more than white trash with money.
And, of course, we're supposed to be getting a winter storm.  The Weather Channel has named it Harper. Depending upon which weather station you're watching, I'm going to get between 5 inches and 12 inches of snow and then freezing rain.  That will make it  crispy crunch and heavy to shovel. 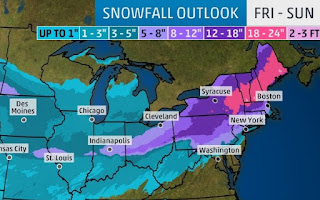 There is also supposed to be some sort of Arctic Blast coming as well, so on Monday the temp will climb to 18 (F).  Tuesday, the day my desk arrives, we're supposed to hit a balmy 28 (F).  I just hope there's parking out front for the truck.