So, it's Sunday morning and some of you are sleeping late.  I'm not.  Nope.  Got up at the usual time.  The holidays, in addition to having that nasty pharyngitis, have screwed up my schedule and finally I'm easing my way back into what I like to think of as normal.
Our store is having it's Holiday Party this evening.  Of course there are that small number who complain that it isn't called a Christmas Party.  I don't doubt most of them voted for the Idiot Jerk in the White House.  These are the same people who criticize the commercialization of the holiday but have no problem going out and buying themselves their own 'special' Christmas present.  For them, their religious beliefs seem to be directly linked to the purchase of an expensive gift.  As they mount that flat screen TV or proudly show off their new Apple watch they will call it a Blessing.  They will say "The real Blessing is that I got it on sale!"
I saw that a few hours ago another ranking Pentagon official handed in his resignation.  This is frightening because the Idiot Jerk is going to try and promote some like-minded moral degenerate.  Of course there is the good possibility that will never happen.  Legal issues, you see.  And there's the wall.  That White Elephant... 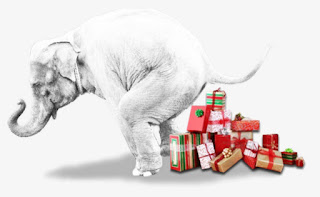 is only popular with his base, and in spite of their number chicanery, they are a minority group.  And just like the elephant, they too are white.  The funny thing is just like those phonies who count flat screen TV's and watches as Blessings, he thought he'd gift himself this wall for Christmas and say "oh, what a deal."  The longer the shutdown continues, the stronger the sentiment grows against his 'wall,' and the deeper he sinks in his shit hole.  Does his base care how bad or how selfish they look?  Absolutely not.  They don't understand a White Elephant is not something to cherish.  No one ever said they were smart, greedy and selfish yes, but smart?  Never.
Posted by Dave R at 6:26 AM