Within the Sanctity of MY

Saturday and it's raining here... supposed to continue through the weekend.  That's fine, I work.  Monday's supposed to bring brilliant sunshine which is fine with me.
Oh, and I saw a Texas Federal Judge ruled that Obamacare is Unconstitutional because the Republicans took out the clause about 'financial responsibility.'  The states complaining were Republican.  If you look on a map they are the 'MY' states.  Republicans chose to shit away the 'family value' claim replacing it with the 'MY' moniker.  'MY' is their most favorite pronoun.  If you listen to a Republican, and more importantly, a Social Conservative, they quite frequently punctuate their conversations with 'MY.'  MY money.  MY taxes.  MY religion.  For the Republican, everything revolves around ME.  "I don't want MY money helping to pay for your insurance."  That's MY money.  It belongs to ME.  MY money is more important than your health.  Republicans have this growing disconnect with humanity.  Sort of like Ebenezer Scrooge.  Their focus is totally on the ME and the MY.  They take their cue from the Idiot Jerk in the White House.  They gather round and bless him because he has sanctified their 'MY.'  They believe he is a blessing because he "gives ME what I want most, the absolute authority of 'MY.'
My nephew Adam and his wife are expecting a baby in a month... give or take a couple of days.  She is blond and blue eyed, he is dark complected, brown hair and brown eyes.  I told them, genetically speaking, he's got it in the bag... literally.  Dominant Genetics, you know?  I think the odds are about 80% that baby's going to have brown hair and brown eyes.
And, for those who've forgotten.  Tonight I go see "Aquaman!"  Be jealous... be very, very jealous. 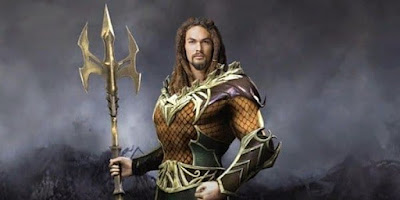 Also, a big Thank You to the 17 people from Tanzania who decided to look at my blog!!