Hello, it's me...  Here's a picture of me that my Mom had when I was just a little shit, a mere 7 months old.  Aren't I cute?  That's my first Mohawk!!  No, I'm not naked, I'm wearing a diaper.  Some day that may happen again, but for right now everything is safe and secure. 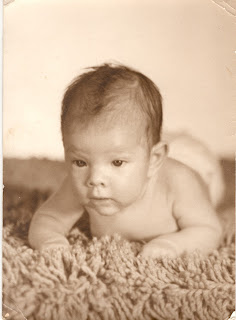 Yesterday, while doing all sorts of odd things around the house, I took some time to scan the headlines.  Talk about a potpourri of bullshit.  Did you know Roger Stone has admitted to lying.... and as part of his punishment he has to publicly admit to doing so and apologize for being a lying sack of shit.  And where did he get these lies?  Guess.  Well, Roger says he got them from some guy named Sam who's with the Idiot Jerk's administration.  So, do you think Roger has started wearing a diaper?  My money says you can Depend upon it. Most likely the Fit-Flex.
And then there was the Tucker Carlson shit show.  He said that because immigrants are poor, and dirty, they should be kept out of our country, especially those dark, brown ones coming up from south of the border.  Tucker's going to stand his ground!  He's not going to cave in to the liberals no matter how many sponsors leave his show.  So is Tucker wearing a diaper?  Probably not, he's choosing to wallow in his shit.  Tucker's proudly proclaiming "I'm a racist, damn you, so stop trying to make me human."
In case you missed it, the Russians are still in the news... but when aren't they.  It seems like every day we get more and more information on how they were working to get their guy elected.  Social conservatives want to believe the Idiot Jerk was elected through divine intervention...  That may be the case, as long as the divinity speaks Russian and calls himself Vlad.
Finally, there was this little, tasty chestnut.  It seems that 62% of voting Americans believe the Idiot Jerk is lying about Russia.  Every time he shrieks 'witch hunt' they think 'asswipe.'  And the 38% who believe the Idiot Jerk?  I suspect some of them have already started hitting the Depends store. They are prepping for that day in the not to distant future when they all start shitting in their pants.