Well, it's Sunday morning... and I don't have to work.  I did do my Local Taxes, the last to be filed.  I owed nothing.  That's normal.
Weather wise the temp is supposed to go up to 45 (F), so it will be on the chilly side.  Sunny and chilly is fine with me.
Paris-Roubaix is live right now.  Called the Queen of the Classics, I don't really know how many queens are riding in it.  Since I'm a Cannondale fan, I'm rooting for Taylor Phinney, a floppy haired ginger who's always had lots of potential.  Today we'll find out how good he is riding over cobblestones. 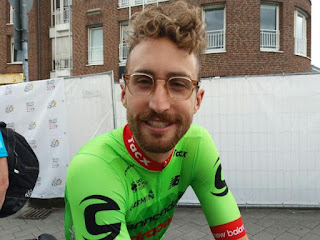 For those who don't know, Paris-Roubaix is known for its cobblestones - miles and miles of them.  Just the thought of that makes my riding bones ache.
Scanning around the news this AM, an article in the BBC caught my eye.  Evidently there's a Bible Study Group in the White House.  Now, I don't know about you, but the constitution seems to make it perfectly clear there is supposed to be a separation of church and state.  Of course, if you're a Crazy Christian, the American Constitution has absolutely no value, no authority, and... well, for them at least, no purpose in existing.  What makes this worse is that these people believe they are wealthy and powerful because of their beliefs.  Gee... I must have missed that scripture.  These people don't understand that their shit stinks worse than their hatred for those 3 dirty words 'Freedom of Religion.'  They are the biggest hate group in America.
Time has come to clean house.  Sweep the rubbish out to the curb.  They don't understand that their Judgement is coming, sooner than they think, and it's not going to be the Judgement they want.  Ah, but then that's life.  The world is going to leave them and their hatred behind.  Be prepared, when they realize their losing they will get ugly.
Posted by Dave R at 7:49 AM