Okay, so it's Friday and I get to go to work.  I get to work 3 days and then I'm off for 1, work for 1 day and then off for a day.  Screwy, ain't it?  Oh, and it's raining again.  This is the first April in quite some time that we've actually had April showers in... April.  For the past couple of years they've shown up in May.  I'm surprised that the Idiot Jerk in the White House hasn't claimed credit.
Yesterday I worked on painting more of the trim in the dining room.  And Big Seig helped... somewhat. 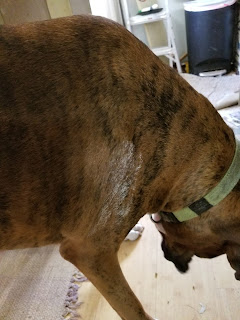 I also got a little over 10 miles in on the bike averaging 3.5 minutes a mile.  Speed and endurance are important for this ride since the total ride is over 27 miles.
And Scotty Pruitt testified yesterday.  From what I've been reading, a lot of people realize he's a gift to the Democrats.
Oh, and it Idiot Jerk did a phone interview with his favorite, fictional TV show yesterday, Fox and Friends.  Of course, I didn't listen, but it must have been one hooting story time.  He admitted publicly that he'd known about Cohen's payments to Stormy, which conflicted with what he'd previously said.  There was also a little bit about how Cohen had actually done "very little" personal work for him...   I understand that sent the Justice Department scrambling since now, according to our Faux President, there should be very little attorney / client privileged information.  They guy can't stop lying, especially when the media spot light is shining on him.  What an Idiot Jerk.
Posted by Dave R at 8:49 AM