I got a call yesterday from World Cup Cycle and Ski just as I was walking into my local Giant.  My shoes had arrived.  This meant my 'to do' list ended getting altered.  I did get the giant holly bush at the end of the front sidewalk chopped down to size, but I didn't get to the trim in the dining room.  Today will be a better day for the trim anyway.  Weather is supposed to be overcast and rainy.  Knowing I'd be itching to actually go for a ride with my new shoes made this a rather easy decision.
And they look spectacular.  I must say, when I put them on at home I did feel a little bit like Dorothy... without the lacy socks.  Sweat socks will do just fine. 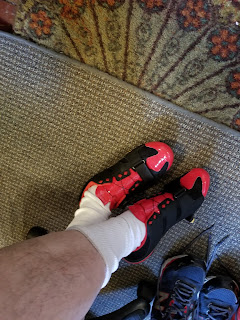 You'll notice there is patent leather on the toes.  Guys in kilts?  Watch out.
As I said, cycling shoes have clips on the soles that fit into pedals.  My whole life I've been avoiding them because they're more expensive and require special pedals.  The investment was worthwhile.  In fact it took about 4 seconds before I slapped myself up side the head and said "I should have done this years ago."  End result:  I cut 10 minutes off a 5 mile ride and that makes a world of difference.


Think of them as super, duper tap shoes.
Twice the Idiot Jerk in the White House has denied spending a single night in Moscow during the 2013 Miss Universe pageant.  Surprise, surprise, they appear to be lies.  For those who don't know, that is when he was supposedly filmed in a Golden Shower video.  And it seems as though he spent at least one complete night, and flew out in the early morning hours of the 2nd night.  There is, of course, no comment from either the White House or the Idiot Jerk's team.  You can bet that when they do say something, the first two words you'll see will be "Fake Media."
I'll leave you with one amazing fact, for those who didn't know.  Everybody has balls on their feet... even women.