So, here it is Saturday.  We're supposed to be getting heavy thunderstorms this afternoon, complete with hail.  Yippee!
I rode a bit over 10 miles this AM - a new route - Fallonica, where ever that is.  Instead of changing gears to make the climbs easier, I made myself work on the climbs.  Boy did I sweat, almost as bad as Trey Gowdy caught wearing only a towel in the Continental Baths.  I actually had to wipe down the bike since I don't want sweat ruining that nice, oxblood finish.
And I guess there's a bit of a religious upheaval happening down in DC.  Ryan did what the Evangelicals wanted and fired the Catholic Chaplain for the House of Representatives.  Some are saying he was ousted for political reasons, that he was too Liberal.  Me?  I think it was because he was a Catholic.  For those who don't know, Evangelicals really despise Catholics.  I work with an Evangelical who says Catholics are "false Christians."  He sees them as really bad people.  Phonies.  And it seems as though the Evangelicals are calling the shots when it comes to the House of Representatives.  Having a "false Christian" as Chaplain would really be a splinter under their fingernails.  Instead of being honest, they're using the Liberal gambit.  I doubt if it will work.  By now most people are beginning to realize that Evangelicals are really nothing more than hypocrites from Hell.
Which leads me to this picture of the Milky Way.  When I saw this I thought "that is freaking amazing!" 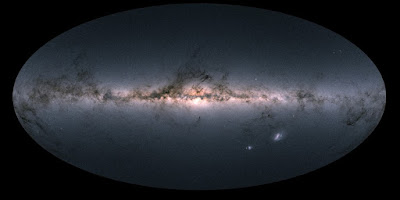 Are galaxy is really large... no, the galaxy is bigger than big... no, that's still not right.  The Milky Way is Gargantuan.  The Sol System is somewhere near the edge.  I find it rather pathetic that the same minds which want to evict the Catholic Chaplain from the House will probably never look at this picture.  Those that do will shrug and quickly move on.  For these people nothing really exists beyond the edge of our stratosphere.  The 'stars in the heavens" will never be anything more than pinpoints of light.  To be anything more than that might lead to unpopular questions.  They are much happier to simply suck on the opiate of the people.  These people will always choose stupidity because it makes them feel safe.  Unfortunately for us, they want everybody to suck on this drug.  Like the dinosaurs, they will die off.  The galaxy awaits.