Rest day!  Well, not from work, rather no workout and no cycling scheduled for today.  Tomorrow I la to ride for at least 12 miles.
I sold some carpet yesterday to a woman who's divorcing her husband.  She has 2 kids, one is 6 and the other is 9.  Oh, and she's planning on taking the kids and moving down to South Carolina so she can be with her boyfriend.  She said her parents are going to be upset, but then they "don't really know him," as in the boyfriend.  I was also told she really thinking about her kids... as well as herself.   Oh, and she's divorcing her husband because he never completes anything.  There was more negativity regarding her soon to be ex, and I ignored it.  The truth is the only person she's thinking about is herself.  She will totally disrupt the lives of her children just so she can be with her boyfriend.  I feel bad for the kids since they are the ones who are going to suffer the most.  You know things are going to go bad when people start using the innocent to justify their actions.
Oh, and for a big laugh, James Comey's book is coming out.  Of course, Faux News won't go near it with a 10 foot poll.  Any thing critical of the Idiot Jerk is off limits because... well, he's friends with Rupert Murdoch, for one, and secondly, he exemplifies everything bad about Conservatives.  Their approach has always been to ignore and lie about everything which makes them look like scumbags.  The more terrible the Idiot Jerk becomes, the deeper they fall into attack mode.  Like a wild animal in a trap, they're going to start chewing off their own limbs.  Paul Ryan's decision is the perfect example.
Anyway, we're about half way through April and the temperature is forecast to go up into the mid 80's (F).  That's hot for this time of year.  Steamin!  And guess who has to work today, and tomorrow, when the temperature is again supposed to be hot.  Oh, and guess who has off for 4 days when the temperature is going to flip flop faster then the Idiot Jerk in the White House (think Trans Pacific Trade agreement).  That's right.  I'll have off and it's going to be cool and rainy.  I need to remind myself that warmer days are coming. 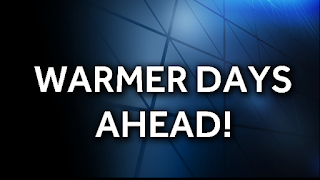 And we all know warmer days are not what the Crazy Conservatives want at all.
Oh, and a little tidbit, rumors have it that the FBI raid on the Idiot Jerk's attorney let them snag voice recordings of.... guess who?  Sizzle.  Sizzle.