My head has been invaded by a Rhinovirus!!  There was a time when I never got sick, now, however, as I get older, that no longer seems to be the case.  Where I went years without getting a cold, now it seems to happen once a year.  This is, I suppose, one of the penalties of growing older; the more years you have under your belt, the more likely it is you'll run into something new to your immune system.
Anyway, I have personal time on the books so I took the day off... and plan to get much accomplished.
Like put my new trainer to the test this afternoon.  I bought myself a new tablet, Asus, (remember when tablets used to be very expensive?) and downloaded the Kinetic App.  It's on my phone, too, but I wanted a bigger screen, which means I'll move all of my fitness apps there.
I also cancelled my subscription to Cycling TV.  NBC Sports has greatly expanded they cycling coverage so I watch my bicycle racing there, besides Cycling TV just got to expensive.  $80 a year compared to the $30 for NBC Sports Gold.
With all of those people evacuating Florida, I hope they remember to take their pets.  We always end up seeing dogs and cats being rescued.  Your animals are totally dependent on you and should be the first thing loaded into the car, truck, or van.  Don't leave them behind!
Oh, and did anybody see the pics of Donnie Jr after his first closed door session with that little committee down in Washington?  Talk about a 'woe is me' face.  This is what the Junior Idiot Jerk looks like after someone has wiped his shitty smile off of his face. 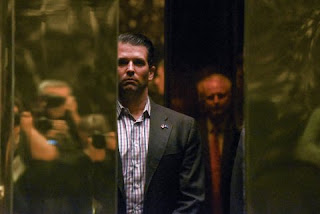 I wonder if he went home and cried in his pillow?  Or if he even understands that this is just the beginning... of the end.
And speaking of the Idiot Jerk, I've been reading how Republicans are sporting their own "woe is me' faces, feeling so... betrayed by his deal with the Democrats.  Holy Crap!  How stupid are these people?  Didn't they know who they were voting for?  Well, that's a pretty dumb question, they voted for him after all.
Posted by Dave R at 10:07 AM