From the first French Grand Prix

Today is Friday and it is the 3rd day of 6 days in a row.  I didn't sleep well last night, kept wondering if what I was feeling in my lower groin could be classified as pain, or just pressure.  Mostly, it's just pressure because everything being held back by my abdominal muscles is trying to push a way out through the bulge, which is in my lower groin, just about as far down as you can go.  This is what I can look forward to for at least 19 more days.  Shit.
Anyway, since I can't go to the gym and my Cardio is limited to gentle peddling on my bike, I've decided to do a little work in my dinning room.  This morning the drapes came down. 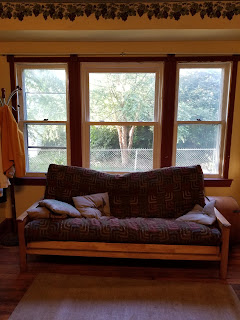 That's right, I have a lot of windows, and since I also have a southern exposure on that side of the house, lots and lots of sunlight all year round.  In the winter, with the leaves off of the trees, the brightness is almost unearthly.  At one point there was a window seat there, but at some time in my homes 112 year history someone thought it would be a good idea to get rid of it.  This is fine because it adds square footage to the dinning room.
First off, the raspberry trim is going to go, replaced by Toasted Sesame, the same color as the trim in the living room.  Oh, and the boarder along the ceiling is going to go.  In my crazier, younger years, I thought grapes and grape leaves would go well with the color of the trim... not so much now.  And that coat rack on the left?  That's going to be history.  I went through my coat closet and sent a lot of my jackets and coats to Community Aid so there's plenty of space.
To the right of the futon you'll see the curving top of an old, wooden hat box.  Think of it as an antique.  I don't know when it was made, but it was originally used by a woman who could afford to wear one of those large hats popular in the early 1900's.  There are several inked stamps on the lid, mostly in German, with dates.  One of the dates you can read is from the First French Grand Prix, which means this hatbox is most likely older than my house.
Isn't life amazing?
Posted by Dave R at 9:17 AM