Particularly about: Bikes, customers, and Trump

Today's Sunday and I get to work a split shift.  That means I go in at my standard 10:30, work 6 hours, go home, and then go back to work at 8 this evening.  Today is our Success Sharing meeting, where they hand out our bonuses for the previous 6 months.  Mine's going to be nice, not nearly what it used to be, but still, for an hourly associate, rather nice.  I'm going to use it to pay off my Amex because I'm going to add a toasty bit to that account when I purchase my new bike.  As for the particular Cannondale I'm going to buy?  Well, I've pretty much settled, in my head at least on the Synapse Carbon Disc Ultegra. 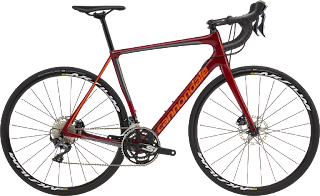 As you can see, it's red.  Red is very important.  There's a Synapse that costs about $600 less, and that's very nice, but it's blue.  I'm not a blue person.  My eyes might be blue, and I might wear shirts that have blue in them, and blue jeans, but that's about it.  My favorite colors are red and green, mostly red, the color of Mars, the god of War...  what can I say?  Maybe it's because I'm a Scorpio.
So, I had a particular customer yesterday.  I knew she was particular because she told me so.  "I'm very particular," she'd said, as she jostled the baby swaddled to her bosom.  She had another sitting in her shopping cart and right of the bat that she was showing her particularity by being as racially diverse when it came to having children.  When her mother pointed out to her that the carpet she particularly liked would cost over $7000 she sighed and said "but it's what I like."  Her parents need to get her off of her meds and into counseling as fast as possible if they don't want this particular person to have life that's totally screwed.  I mean, I can't even imagine her attempting to raise children.
And I saw this interesting opinion in Bloomberg this AM, on how the Idiot Jerk in the White House is on the verge of selling out his base.  And, of course, I had to laugh.  While the media was reporting on his treatment of contractors, how he reneged on contracts, and sought legal action when contractors fought back, his Trumplodite Bonga Wongas listened only to his Tweety words consistently trumpeting 'fake news.'  And now the Idiot Jerk says "the wall can wait."  The EU says he's shifting on his Paris Climate Control opinion.  Oh, and maybe immigrant children should be allowed to stay.  They are throwing up a crazy shit storm on John Kelly, Trump's Nanny, or at least that's what some are calling the White House Chief of Staff.  Of course, they didn't want to believe the truth.  They wanted to believe the Idiot Jerk, a turd of a human being who has only one true loyalty, and that's to himself.
Posted by Dave R at 8:18 AM