I went to see "It," and I liked "It."  While being classified in the Horror genre, the film is actually more of a creepy, suspenseful thriller (emphasis on creepy) with elements of horror thrown in for good measure.  In the original draft some of the children, like Stan, had been replaced with composites.  Wisely, they are all present with all their idiosyncrasies, and their parents, in the final screenplay.  Their parents are very important.  They come off as insensitive, and creepy, and bad, and, in the end some are worse than "It."  This movie does more than flirt with pedophilia, and child abuse, and bullying, they are on full display.  Their parents are what make the 'losers' so strong.  Because of their parents, these children can look into the face of evil and say "I'm not afraid of you."
And "It" is  creepy scary, filled with scenes of family pictures on a slide projector, and chocolate Easter eggs, and gushing blood, and balloons, lots and lots of red balloons.  And clowns of course.  Clowns that eat children. 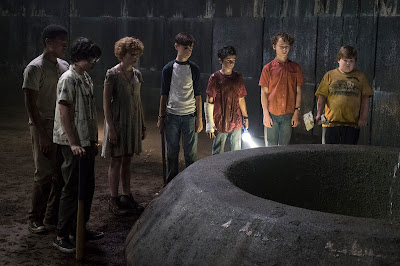 My surgery consultation isn't until 10/4 and until then I'm limited in what I can do... like just about nothing at all, except ride the bike on the trainer.  Everything else I do requires using my abs.   When I asked my Dr about cardio he said "walking is okay."  Walking?  That's about it.  So I'm kind of like saying "shit" all of the time.  Another thing is that I never knew hernias were that common... until I went to work yesterday and found myself surrounded by a sea of voices clamoring "I had one," "I had one," "I had one."  Cashier Judy said "I had a triple and when they were fixing it my lung collapsed."  Holy shit.  Anyway, I can't wait until it is fixed because right now I feel as though I'm turning into a load.
Posted by Dave R at 9:18 AM

Email ThisBlogThis!Share to TwitterShare to FacebookShare to Pinterest
Labels: hernia, It, surgery