Well, that shitty CycleOps Fluid 2 that was sent to me instead of the trainer I had actually purchased is all boxed up and waiting for UPS to pick up tomorrow.  Even though it was not a CycleOps issue, the whole thing has pretty much soured me on the company and their trainers.  There are other trainers out there, some of which are rated as good, or better than CycleOps.  And me, being me, went looking... and ordering one, and probably because I was still feeling a bit perturbed, I went big and green.  Kinetic Green. 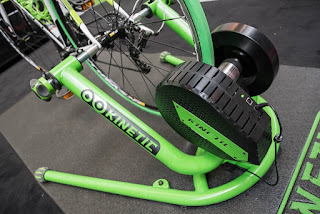 While I didn't order their green tire or the mat, I did order the Smart Trainer.  It rocks and rolls, as they say... literally.  The back wheel will literally angle to the left or the right as you pedal simulating actual pedaling on the road.  It has Bluetooth sensors built in to measure cadence and speed and energy output:  how many watts of energy you're burning as you pedal.  This is a lot more than I was thinking about and I thought about for... oh, 5 or 6 seconds before I decided to go big.
Here's a Labor Day update on those Baleaf jogging shorts I bought (2 pair).  The reviewer who claimed they revealed a lot was spot on the mark.  It doesn't make any difference if your jogging, using an elliptical, or even just walking.. in no time at all your compass is pointing true north.  These are not shorts for the shy.
And, of course, being Labor Day, I get to labor.  They're bringing food in for us, they always do on a holiday.  Some one said Subway, which tends to be high calorie, low nutrition fast food, made with processed faux turkey and ham, which make it not that healthy, in spite of what Jared said... remember Jared?  Their pedophile spokesperson?
The new trainer should arrive Wednesday, so pictures on Thursday.
Posted by Dave R at 8:48 AM