So, the new trainer arrived yesterday.  You have no idea how much joy filled my heart when I opened the flaps of the box and saw white packing foam.  Nothing was dumped in the box.  This was brand new.  And, of course, the dogs love getting presents, even when they're for me.  They're dogs, they don't know it's not for them.  All they see is a big, big box.  Mostly they sat silent and watched me unpack the box. 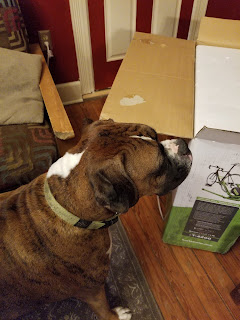 Assembling it was a different matter.  Big Seig wanted to watch close up and on more than one occasion I had to push his head back.  Lily just watched, until I put the bike on it, and the she barked at it.
And what about the Idiot Jerk suddenly jumping on board the Democratic budget wagon yesterday. As soon as I saw that little news flash I knew why, and then I saw Anne Marie had pretty much figured it out when she commented on another blog.  Mar Lago.  That's right.  The Idiot Jerk's beach front vacation wonderland looks like it's going to take a direct hit from Irma. 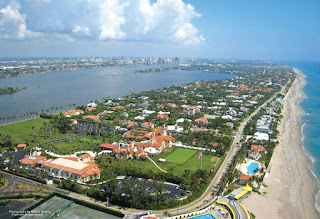 That surge is going to wash right over that little island.  It's going to smash down door, crash in windows, all the while the winds of what's predicted to be a hurricane downgraded to a 3, rip off roofs.  The Idiot Jerk wants to make sure there's enough Federal Money available for when he needs to rebuild.  The Republicans were no doubt going to tie up those funds with too many restrictions and he didn't want that, so he handed them a big turd,  I suspect this will lead to open hostilities between the two.
Posted by Dave R at 9:29 AM