"Joel Osteen is bad for Christianity"

That's a quote from my brother, a retired Methodist minister, an White Evangelical, and a Social Conservative.  He said that this morning at breakfast.  He also said JO was an embarrassment.  Notice, I used his initials?  They could also stand for Jerk Off.  Am I saying Joel is one?  No, that would be way too kind.  The fact that he is both 'bad' and an 'embarrassment' is symptomatic of much larger problems for people of his faith.  Their inability to recognize the evil of the Idiot Jerk in the White House is extremely problematic.  They don't understand he gives them what they want because they praise him with the adoration he craves.  Their blessings only feed the cancer.
And what about the crazy Texan Conservatives?  You know who I'm talking about, the ones who want to secede from the United States.  They're special, you know?  They don't need the United States of America... until Harvey hit.  Now they're singing about 'disaster relief.'  Now they're singing about needing help from the Federal Government.   I'm not talking about all Texans, a lot of them are very good people, they can't help they live in a state that is governed by selfish Conservatives.
I talk a lot about Karma and how the Universe fixes mistakes, and I've also said that the Idiot Jerk in the White House, and the Republican Party have stacked up a lot of bad Karma.  Karma might just smack both into oblivion.  Right now Karma is surrounding both in the form of North Korea, in the devastation of Harvey, in a debt ceiling that needs to be raised, and a budget that needs to be passed... and along comes Irma, who may smack the shit out of the Gulf Coast or the Eastern Seaboard.
I'm reminded of Mrs. Lovett's line from Sweeney Todd "Have all the demons of hell been sent to torment me?" 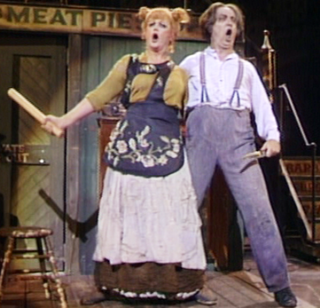 I suspect that's what Joel is thinking right now, totally incapable of knowing the "evil of his ways."  And the Idiot Jerk?  I wouldn't be surprised if he's ready to throw himself down on the ground, pounding his fists and kicking his feet like a wee child suffering apoplexy.  This is how the Universe works.
Posted by Dave R at 9:55 AM