So, the Idiot is in Saudi Arabia, home of the holiest of Muslim sites - Mecca.  There were, I believe, 2 Saudis involved in the 9/11 Terrorist attack and the country has been known to have been sponsoring terror groups for years.  And this very Muslim country was not on the banned list.  Doesn't that make you go hhhmmmm?  Obama wasn't to keen on the Saudis because he knew they were more interested in buying arms then they were in fighting extremism.  Of course with the Idiot all they had to do was wave a fist full of green backs, buckos, you know?  "Arms Deals" is the magic phrase for the Idiot, as it is for all Republicans, for them, nothing beats making money.
I understand the Saudis are preparing to fork over $100 billion for helicopters and missile defense systems, and most like a whole laundry list of other weapon related merchandise.  Woah!  someone in the good ol' USA is going to make mucho grande millions.  That's right.  The munitions manufactures have always been high donors for the GOP.  A long time ago, when we were involved in a little skirmish we called Vietnam, the vast majority of the country was anti-war... not, however, those who were making the bombs and the bullets.  They were making money hand over fist. not the people who were actually in the assembly lines, nope, they just got their everyday paycheck with a little Overtime now and then.  It was the big guys who were making the money, the CEO's, the Chairmen of the Boards, the ones who donate heavily to the Conservative Party.  And it looks like they're going to make a lot of money again!
Of course, he's only in Saudi Arabia for 2 days, after that he's going to have to go to Israel, whom he betrayed to the Russians.  Holy Crap!  I just got this vision of Judas in my head.  What if the Idiot tries to kiss Netanyahu on the cheek!  Wouldn't that be like sooooo perfect? 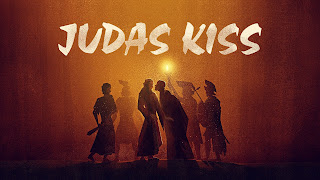 Especially after laughing it up with the Muslims in Saudi Arabia?  And for those who didn't know, this whole Muslim 'ban' had nothing to do with Terrorism and everything to do with giving the haters of his base a cherished little something to call their own.  And I suspect that his loyalty to any one country is tenuous at best, unless, of course you're Vlad, the impaler of Democracy.
Posted by Dave R at 9:10 AM