Sit on it and spin

So, my Mom is back in the hospital... again.  We went, oh... 3 weeks this time.  And there's nothing wrong with her besides old age, and dementia.  She actually called 911 herself because she thought the people at Graysonview were too slow.  She's in a regular hospital room rather than ICU, or CCU since there's nothing really wrong, and they'll run a battery of tests looking for something other than the dementia.  When I saw her on Wednesday she said "the only thing I really miss was having to give up all of my dogs to come here (Graysonview).  She didn't have dogs, she had a fat cat.  This is how it goes.
On the light side of politics, I saw saw this article this AM regarding our Vice President, and found it very telling.  Sounds a lot like the GOP is not going to circle their wagons around the Idiot.  The fact that they're saying the Vice Idiot was kept in the dark?  Well, isn't that the kind of shit you put out when you think Plan B might be the only viable option left on the table?  It's kind of like subliminal messaging the rabid, core Idiot supporters that it's a good possibility that a change might be coming.
Oh, and Joe Lieberman for AG?  Give me a break!  Now, this might piss some people off, but at 75 old Joe is way, way too old.  Even in his prime he was never the brightest crayon in the box, now he's even worse.  In fact, it seems to me that the Idiot trying to stack the deck with another clown. 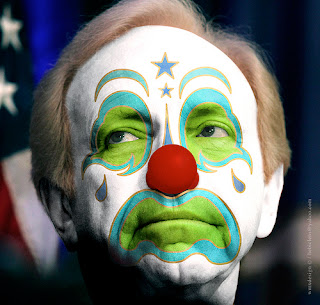 And, of course, the Idiot is leaving tomorrow for a Middle Eastern, European Vacation.  I bet he's expecting to get souvenirs.  He is, more likely to be disappointed.  He has already started changing his itinerary.  He was supposed to speak at Masada, but now that's off because they won't let him land his helicopter on the top.  He doesn't want to land at the base and take the tram up like other presidents have done because... he's special.  And you know they're all going to smirk when he walks into the G7 conference, and laugh at him behind his back.  He's going to want to take charge, and they will, no doubt, tell him to sit on it and spin.