And not only in the White House.  We have them here in Central PA.  Here are some examples:
Two nights ago a couple tried to return some paint.  You see they'd bought it over a month ago planning or repainting their house and, over the past 4 weeks, ended up changing their minds.  When the manager told them we were not going to return $450 in paint they grew furious... and dropped the name of our competitor.  For those who don't know, our competitor has a store less than 1/4 mile away and customers think that spitting out that little name is going to make us cave... no way.  We hear it daily.
I'm serious.  Yesterday morning I'm talking to a customer on the phone who's moved past Idiocy 101 into his 2nd semester.  He's hemming and hawing about the carpet, and then says "Lowe's is coming out to measure tomorrow, they're going to do it for $400 less."  That's his way of telling me he wants me to take money off his already cheap carpet.  He thinks he's a smooth operator.  My response?  "Okay, let me know if you change your mind."  That got me a few moments of silence before he finally said he'd let me know.
Then last evening, about 20 minutes before the end of my shift, I took a walk down to our Returns Desk to see if anything needed to be put away.  And, as I'm walking by our A/C display a customer stops me. 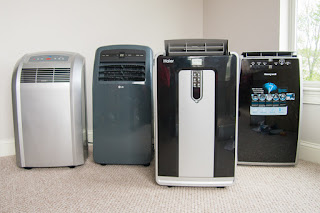 This is Idiot #3.  He asked me if we were going to be bringing out any more units.  I glanced over and saw that we had about 15 different sizes of A/C units there, and it was packed out full - it's been cool and rainy here so there hasn't been much of a demand. So I say to this gentleman "I don't know, that's a Seasonal / Appliance product.  We may have some more in the back.  I can get an associate to help you."  Now, I don't know what he wanted me to say, but my answer was not what he was expecting.  And, I kid you not, the first words that came out of his mouth were "Well, than I guess I'm going to have to go to Lowe's." To which I said "okay," at which point he began muttering about my lack of customer service skills.  He muttered all of the way out the front door, not loudly, but constantly.
So many Idiots seem to have this air of entitlement about themselves, a 'you need to give me what I want' attitude.  They neither listen, nor do they try and understand.  It's almost as though they think understanding diminishes them in some way.  And in every one of the instances above you could replace the customer with the Idiot in the White House... no difference.  Idiots seem to be abounding around us and for too long we've been catering to them rather than tell them to shut up.  Maybe it's time we changed.