So I went to see "Guardian's of the Galaxy, Vol 2" last night.  I liked it, a lot.  That's right, I'd even go so far as to say it's very good.. and it's about 'parenting' of all things.  My only complaint would be: Disney! stopped tacking on all of the bullshit during the end credits!  Holy Crap!  Except for the promo for the next Guardian's installment, everything else was a waste.  Like "I am Groot."  The friends I was with sat and counted all of the times "I am Groot" appeared in the end credits - totally pointless, and not amusing at all.  When I stood up to leave, my one friend said, "but you might miss something."  Nope, I wasn't going to miss anything at all.  I know, because we stayed until the credits were totally finished.
And, of course, Sally Yates testified yesterday and what really stands out above all else is the fact that the Idiot in the White House waited 18 days to do anything about Flynn.  Of course we all know why, he's saw nothing wrong with Flynn's behavior.  The Idiot likes Russia.  He claims to be a business man and Flynn's dealings were just... business, nothing more.  And his supporters don't seem to care because they cherish the Idiot's phoniness.  They swim in his river of lies, paddling around as though they were tubing down a lazy river on the 4th of July.  Idiots all.
And the Appeals court is skeptical about the Idiot's travel ban.  Sounds like they realize it's nothing more than campaign hatred.  Like the Idiot's Wall, it was meant to unite the haters and racists in this country and tried to call bigotry 'populism.'
Finally, yesterday I put a new back splash in my kitchen. 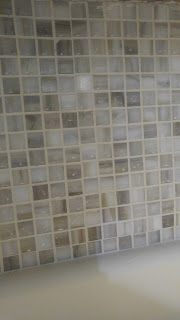 It's an iridescent glass mosaic.  This is what happens when you become a Decor Specialist!  Ah, well, as long as it adds value to the house it can't be bad.  Mostly neutral colors, it will go well with my cabinetry when I paint it... and yes, I'm going to paint my kitchen cabinets.  And since I know a little bit about painting I'm sure they will look stunning.