I saw this yesterday on the NBC news page and got a laugh.  Evidently some crazy in Texas has accused Disney of declaring war on Christianity.  Oh, and it isn't just Disney, this wacko lists a whole slew of companies because they stood up to the hate bill in Georgia.  Some crazy named Saenz, who's president of something called Texas Values.  I checked out the home page and the comments are all negative, especially in regard to what he calls "freedom."
Anyway, I got to thinking this was exactly the same thing that happened 2,000 years ago when Christianity was growing out of its underground religion status.  Back then the gods were really old, having been around for what?  About 3,000 years.  I'm sure the priests of Zeus said the very same thing, "there's a war against the gods!"  And they persecuted Christians; threw them into arenas to be slaughtered by gladiators because they represented a change to the status quo.  Society was changing.  Society is always going to change, there's no stopping it.  Religions come and go.  They stick around for as long as they are able to adapt.  If they can't evolve with every thing else, they slowly disappear.  Me?  I've always had a fondness for the gods, especially Mercury. 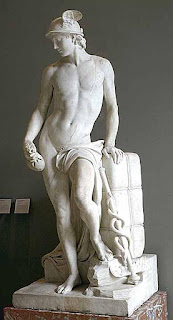 Dashing, isn't he?  Wouldn't you like him to chase you down the street?  I actually touched him once on one of my walks through the Louvre.
Anyway, will groups like Texas Values, and idiots like Saenz ever understand Disney is not at war with them?  Of course not.  Their beliefs are too rigid.  Their is no room in their faith for adaptability.
Inevitably they will die off.  It's called evolution.