In order to be officially put on LOA I needed to have my Orthopedic Specialist complete paperwork and have it faxed to the home office in Atlanta.  I was surprised when I was told there would be a $10 charge for this service, and even more surprised when I was told it would take 7 - 10 days.  Today was the 8th day so I called the office to find out if the paperwork was completed.  I got to speak to Tiara whose job, it seems, is to ensure all forms are filled out and faxed correctly.  I was told my form will be faxed today.  And after I got off the phone I wondered to myself why anyone would name their child Tiara.  This is what I picture when I think of Tiara. 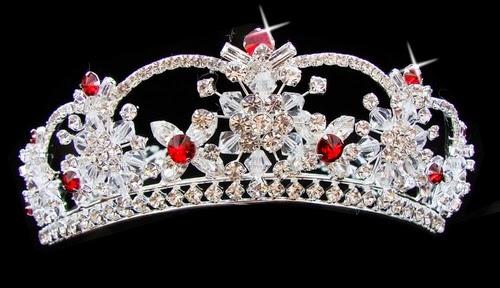 Now I will have to tell you that I've met Tiara.  This is not what she looks like, not sparkly or shiny at all.  In fact she is too large to be called full-figured.  She does not have a glittery personality.  For her everything seems to be an almost insurmountable task.  She responds to questions slowly, as though pronouncing each syllable in an unprecedented chore.  And, unless she changes it, she will go through life with this name.
Occasionally you will hear of celebrities giving their children odd names, but then they are a quirky bunch.  It's more then a bit different when the average person gives their child an unusual name.  About 10 years ago, when I was still working for IP, the 16 year old sister of one of the young women working in my office gave birth to a baby girl and named her Ariel.  All we could do was look at each other and mutter, "holy shit, she named her after the Little Mermaid."  Now there really is nothing wrong with naming your child Tiara or Ariel, just remember that not everybody is going to like that name as much as you do, in fact, if the child grows up to not be a Tiara or an Ariel, that name my just bite them in the ass.