There are a lot of people out there who believe Darwin hit the nail right on the head with his bit about evolution, but not every body is on board.  In this country (USA), there are a number who think he got it all wrong, mostly because of their religious beliefs.  Here, in this country, we call them Republicans.  They want to believe in Creationism, which is fine since we have freedom of religion.  I would also be willing to bet most of them know the difference between evolution and revolution, in the first change takes place over a period of time and in the second takes place practically overnight.  They are a rather amusing bunch since their own party is, in a painfully obvious way, is change.  That's right, Republicans are evolving. 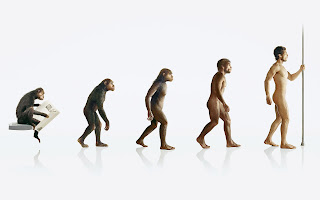 There was evidently a Washington Post / ABC Poll released on Tuesday and the numbers must be frightening for a political group who want to call themselves the Grand Old Party... well, maybe Grand Old is right on the button.  It's a shame they can't go through a revolution and have the whole thing done with, but no, they are going to evolve in a very public manner.  There is the growing chasm between Chris Christie and Paul Rand, neither of whom seems aware of their loyal voters slipping off the edge and falling into the abyss below.  There are the pundits pulling at it this way and that, feeding ego and bank accounts rather then party politics.  They are the proverbial three legged stool and we can only sit back and watch as each leg tries to chop up the other two.  As my Grandma used to say, they got too many cooks in the kitchen.  Still, whether they want to admit it or not, the Republicans are evolving.  Now, all we have to do is wait and see if they turn into a Ferdinand or a Caliban.
Posted by Dave R at 5:59 PM