When the Orica-Greenedge bus snagged the Finish Line on the first day of the 2013 Tour de France I sat watching it in my living room and couldn't help but laugh.  Not just because it was funny, but also because I new then this was going to be a different race.  Now I know there were a lot of people who wanted the grand pomposity of a one hundred year celebration.  Every year it's big, but this year it was going to be bigger, it was going to be the biggest year ever.  Until a green and white tour bus drove into the finish line.  What really happened was the chassis on which the Tour rides was somehow bent and as a result it's not going down the road the same way.  There are still some familiar names, like Chris Froom, near the front of the pack, but he's in danger of being crowded out of the scene by all those new, fresh faces, a number of which ride for Orica-Greenedge.  This doesn't mean he isn't going to win the Tour, as many expect, just that for the first time in quite a long time some unfamiliar names are taking the podiums. 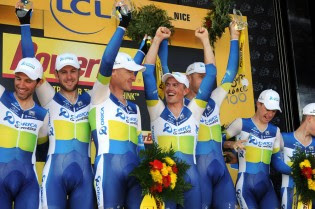 This year's tour is not following the plan that was written.  Who ever thought that in it's 100th year it would decide to reboot itself.  You can hear it in the voices of the announcers because this is not what they were expecting.  You can see it in the faces of the Orica-Greenedge cyclists who seem to feel it more important that as many of their team where the Yellow Jersey as possible.  There isn't any ego when they are on the podium.  What you see more then anything is that "holy crap, I can't believe I'm here," innocence.  I don't know why but I like this year's tour more then many I've watched in the past.  Maybe because it seems that corporate cycling has realized it needs to take a back seat.  Maybe because this year there are so many fresh faces.  Or maybe it's because for the first time in a long time all those young cyclists are just riding to race in the Tour de France.﻿
Posted by Dave R at 4:00 AM