When the Squeaking Stops

Well, it's Wednesday and I have to go to work today.  My daily work schedule is... shall we say rather exotic right now.  I work 2 days, then I'm off a day, I then work one day and am off for 3.  This doesn't really bother me since I'm only working 32 hours per week.  That will change soon enough.
I disconnected my Steam controller from my upstairs TV this AM since I never use it.  The original idea for the purchase had been for me to be able to play PC games downstairs on the big TV, however Big Seig chewed up the wifi dongle.  The only way the controller would have worked downstairs would have been for me to run a direct line from the TV to my router... well, that wasn't going to happen.
And, speaking of Biggie, his Christmas beaver stopped squeaking so he's cast it aside in favor of a Purple Squirrel. 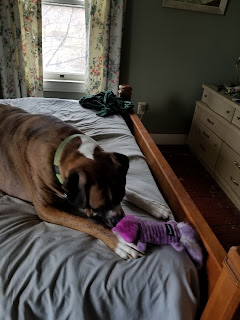 I guess this is his way of saying beavers are no longer fun when they stop squeaking.
And I was reading this AM on my Bloomberg Technology feed that if your PC or laptop is over 5 years old, they are recommending that you update it with something newer, not because it's outdated (even though 5 years old is pretty old), but because the patches that are going to be coming out to fix the Intel chip problems are going to slow it down... a lot.  They suggested a Lenova laptop which starts at about $1300, which is a bit squirrely if you ask me.  There's no way I'd spend that much.
There was some other squirrely news this AM - evidently there have been a number of other people form the Idiot Jerk's regime that have already talked to Mueller; something that's been kept under wraps, so to speak.  Now we know why Ultra Conservative (and bad hair of the year nominee) Trey Gowdy

is trying to shut down Mueller and his team.  Desperation, you know?  Because this loser is so squirrely, I'm wondering if Biggie would play with him, or just take a big chunk out of his ass before he sends him running home.