Okay, so the temperature is supposed to hit 29 (F) as we head into a heat wave - 54 (F) by Friday - it will be dropping back down to normal temps for this area of the country next week, normal being mid to low 40's.  I was going to go see my Mom this afternoon but now they're calling for a snow / freezing rain / sleet combo, so I'll probably move that visit to Wednesday when I'm off again.
Yesterday we were busier than I had been expecting which meant I had to deal with more customers than is usual for this time of year, most them were unremarkable, except for 2 ladies (and with at least one that term is questionable).
The first incident occurred while I was setting up a carpet measure with a couple who had moved to this area from Wisconsin.  A lady (?) stopped by the flooring desk and I acknowledged her and told her I'd be with her shortly.  A few minutes later she walked by carrying a rug from our area rug table.  No more than 2 minutes later I received a call from the Service Desk where this lady (?) was claiming she'd bought the same rug the day before and had only paid $28 not the $97 list price.  I called the lie a 'lie,' and evidently she got huffy.  She didn't have her receipt, she didn't have the credit card she'd used, and she didn't have her driver's license (yes, our technology lets us use that to pull up your credit card receipt).  And so she left the store... without her area rug, though she did cry out as she walked out the door "I'll be back!!!"
She ain't coming back.

Then, twenty-five minutes before we closed (7 PM), a 2nd lady shows up wanting price quotes on tile - she's planning on doing a bathroom sometime in March.  She wanted white subway tiles.  We carry ceramic subway tiles in the store, suitable for back splashes, walls, and counter tops... but not for bathrooms where porcelain should be the tile of choice... for a number of reasons.  We sell porcelain subway tiles, but don't carry them in the store.  So what did this 2nd lady do?  She decided to browse our tile aisle again, looking at all of the porcelain tile we carry in the store.  When they made the announcement that the store would be closing in 15 minutes, she ignored it.  When the 10 minute announcement was made, I politely informed her that the store would closing shortly.  And then she lied.  She told me she'd asked at the Service Desk how late the store was open and they'd told her we were open until 8 PM, and went back to her browsing.  So I corrected her, adding that they would be start locking the doors shortly.  Heaving a big sigh, she complained "then I guess I'll have to do my research at home."  And I just nodded and wisely said nothing.
Why is some people think everybody else is stupid? 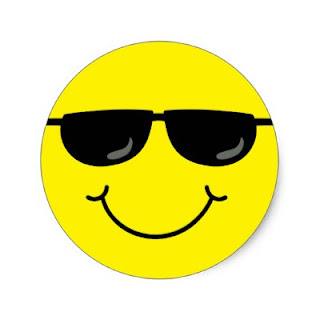 Do they think everybody's a Republican?
Posted by Dave R at 7:29 AM