So, here it is Monday, the 2nd day of my 3 days off in a row... and it just happens to be Martin Luther King day.  I didn't know today was a holiday when I requested it off, I just wanted to make sure I got 2 days off in a row.  And evidently MLK day has become more popular than President's Day, which doesn't surprise me.  A while back corporations decided celebrating Washington's Birthday and Lincoln's Birthday gave workers 1 too many holidays in the month of February, so they lumped them together into Presidents Day, a holiday which represents neither of these 2 great men.  While January has Martin Luther King Day, a holiday dedicated to one great man, February has Presidents Day, a holiday dedicated to 2 great men whose names aren't even mentioned.
Oh, and in case anybody out there is wondering, the Idiot Jerk in the White House has declared that "I am not a racist," which is so very, very funny.  Republicans are tripping over themselves trying to do some sort of damage control... what a shame they didn't start until nearly 48 hours after the Idiot Jerk's comments were first made public.  Did it really take them that long to realize he was looking like an even bigger shit bag than he already was?  I doubt it.  More likely it too them that long to understand that the smoke in their eyes was actually coming from the Gateway to Hell.
At last count there were 30 Republicans from the House of Representatives that were "retiring."  That's right, they're not going to be seeking re-election.  Many a whispering that they will lose control of the House...   This is totally beyond belief to the Idiot Jerk's loyal supporters.  That there are multitudes out there who don't sing hymns to personal greed, or who don't bow down daily to Mammon, is a truth they will never fathom.  In particular this a problem for Social Conservatives who presume every pay raise, every bonus, and every tax break is blessing from God.
Anyway, when I jumped on the scale this AM I was a little surprised to see that I gained 2 lbs yesterday... of course that's not true.  This is a primary example of why they tell you not to weigh yourself every day.  There is no way my fat cells grew 2 lbs heavier in 24 hours, not did my muscle mass increase by that amount.  My water weight went up as well, which meant that I drank more than I voided, or sweated away.  Every thing will balance out in the end. 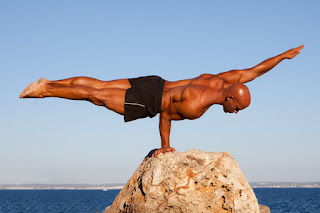 By the way, that photo above is not me... I still have hair on my head.  Besides, it's 14 (F) outside, the sky is getting overcast, and we're supposed to have some snow tomorrow.  Wow!  More free Cardio!
Posted by Dave R at 9:13 AM