Well, we had some snow....  in fact there are still flurries falling.  Total accumulation here is around 6 inches.  The dogs love it since... well, they're dogs and dogs love snow.  They run around using their noses as little plows.  Yesterday was snow filled playtime.  Last night their coats were so soft after all the snow had dried.  Now they're out barking at all of the neighbors shoveling their sidewalks and driveways.  I did my shoveling earlier.  Like I tell people, take advantage of the free cardio. 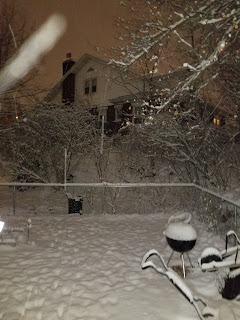 I saw a clip of Steve Bannon going into testify yesterday.  My, what an ugly man; the ugly inside him is beginning to push out through his skin.  I also thought he looked scared, which makes sense since he's nothing more than an arrogant, conservative asswipe.  You'll find that almost all conservatives are spinless and gutless when under pressure.  As they used to say in old, old crime movies "this canary's going to sing," when they start turning the screws.
And I saw that there are researchers out there in the big, wide world attempting to write algorithms which will translate what your pets are saying.  I'm sure my dogs have a vocabulary that's riddled with obscenities.  Nouns and verbs only, no adjectives, no adverbs, and definitely no conjunctions.  Of course I'm sure there are people out there who feel that their beloved pets speak in complete sentences which sound a lot like 'baby speak.'
Oh, and there's another plan to keep the government from shutting down.  The Idiot Jerk is, of course, blaming Democrats because they won't line up to kiss his ass the way the Republicans have.  No matter how much he whines and complains, almost everybody knows this is his problem.  My advice?  Shut it down.
Posted by Dave R at 7:35 AM