Since it's Saturday, I thought I just throw out some random bits and pieces.
This is the first Saturday in January which means we're going to have our Kids Workshop.  According to Accuweather the temp this morning, during the workshop hours, is going to hover in the very, very low teens (think 13 F), and you can bet there are going to be parents to bring their 3, 4, and 5 year-old children, not because they have a lot of fun, but because they get something for free.
Interestingly enough, even thought the Idiot Jerk and other high ranking Republicans are calling "Fire and Fury" nothing more than a pack of lies, lies, lies, the basso profundo undertones in their song are singing truth, truth, truth.  Remember their idea of Damage Control is to attack anything and everything that laughs at them.... so start laughing!
Here's a sad little puff piece in Bloomberg written by Anousha Sakoui which uses a photo of Jack Black to head the article, but then completely fails to mention him, or give him any credit for Jumanji's success, instead those kudos are given to Dwayne Johnson and Kevin Hart, two comedians who evidently need to have their egos petted by Sony Pictures.
The Golden Globes are this Sunday - a lot of people will be watching them, I most likely will not be one of them.  Not a big award show person here.  Oh, and the Producer's Guild announced their nominees yesterday - 11 films are nominated... including "Wonder Woman."  "Get Out" got a nomination, too.  Many of those titles will get Oscar nods as well.  Last years Oscar winner "Moonlight," was a finger in the eye to Social Conservatives every where, and wouldn't be surprised if the Academy didn't do it again by giving the Best Picture award to the  inter-species love story, adult fairy tale "The Shape of Water." 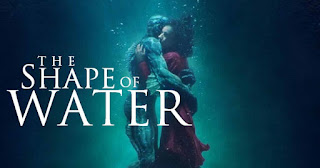 I stretched my scar tissue doing crunches with a 12 lb medicine ball yesterday and now I'm a bit sore.  Shit.  Time to take an anti-inflammatory.
Posted by Dave R at 7:47 AM