Well, it's Wednesday and it's 3 (F) outside.  For those who don't know, that's cold.  Everything freezes.  For those of you down south there's something called a bombogenesis heading your way, in fact it's going to stretch up and down the eastern seaboard.  This will make for some rather cold golfing at Mar-a-lago.  Are these changing weather patterns the result of Global Warming?  Most likely.  Of course the Idiot Jerk in the White House doesn't understand Global Warming, or that the result will not only be higher seas, but climate change all over the place.  The Arctic is shrinking and the Bering Strait is on it's way to becoming a major trade route between the Atlantic and the Pacific.  And who's going to take advantage of this?  My bet says the Russians and the Chinese, since the Idiot Jerk's main focus is on deregulation... oh, and building his damn wall because his racist supporters.
According to the forecasters, we have 5 more days left of these bone chilling temperatures, after that our daily highs would get up into the mid to upper 30's.  Yippee.
Yesterday I had my 6 month appointment to have my teeth cleaned.  Now, my dentist has TV's in all of the rooms, and when I got there my Dental Assistant asked if I had a channel preference, and I said "no."  Big mistake!  She had on the Today Show.  Hoda Kotb officially replaced that perv Matt Lauer.  Listening to her and Savannah Gutherie chitter chatter was worse than having molten lava poured into my ears.  Evidently she adopted a baby girl a bit ago and was busy babbling about her when she spit out some inanity on how this baby was a "blessing from God."  No, that baby was a blessing from another woman's womb.  Then the two women giggled and laughed and said how some people would not be happy because they were both Republicans....   Need I say anything more?
Anyway, I've been riding the new bike everyday - on the trainer, of course.  New saddle means I sit on it differently, which means I have to adapt.  I signed up for Rouvy, which a training software package and yesterday I took a ride up and around the Red Rocks Amphitheater... and thought my legs were going to fall off.  You see the trainer actually increases pressure to simulate hills, which causes you to shift gears, and I have more gears with this bike than I did with the X6.  Believe me, that was one of the easy rides.  One thing I did learn, I need to listen to my own music, not rely on the music that comes with the videos... which definitely is not inspiring enough to get my legs pumping. 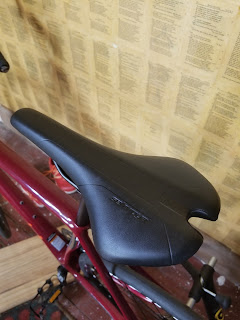 How's that for a comfy ride?