So, I'm getting a new phone.  Nine months ago I was also in the market for a new phone, looking for a replacement for my aging S4.  Back then I looked at a lot of reviews for many different makes, a minor adventure in pointlessness; no matter who was publishing the review, it was most likely written by a fanboy (or girl).  There is no neutrality.  The negatives are always minor since no one wants to actually dissuade from avoiding one specific phone.  I ended up choosing an LG which turned out to not be a very good fit, which is why, 9 moths later, I'm getting a new phone.  One my biggest complaints was not being able to adjust the screen sensitivity.  You have no idea how many apps I accidentally turned on while putting the phone back into my pocket.  Talk about draining your battery fast.
And in case anybody is wondering, iphones don't even enter the picture.  I have never been what I call and 'applehead,' an individual infatuated with Apple.  Now, I don't discriminate, in fact I have several friends who are 'appleheads.'  Brandon, for example, talks to Siri all of the time.  He's always asking his phone questions, mostly, I think, because the first time Siri answered back he experienced some sort of mini-rapture.  Another example is the HR woman in my store who switched from an iphone to a Galaxy for... oh, 4 days, and then went back to an iphone.  When I asked her why she said, "oh, it was just too complicated."
Anyway, I ordered an S8 - it should be here on Wednesday.  Orchid Gray.  You see, I like things that are complicated, well, that's not exactly true, I don't find Samsung phones complicated.
Also, certain other phones weren't even in consideration.  Anything related to, or using Microsoft was out of the picture; not android compatible. 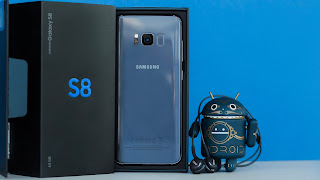 Well, I'm off today and I've got a ton of outside chores to get done before the temps creak in the low 90's.