This country will be in deep shit if we even remotely believe that "The Vlad" was being serious when he uttered those words (in English, no less) yesterday.  He likes the Idiot - every dictator needs their lackey fool.  And you know there were Idiot supporters who heard him and nudged themselves jovially in the ribs and grinned, saying "Hey, that Vlad guy?  He ain't so bad."  Right.  They know nothing about Russia, or how The Vlad has managed to get that countries constitution changed in order to stay  in power (a legalized dictator) for 17 years.  They don't know how that country has been in a recession for over 17 years and "The Vlad" as done nothing to help the situation, or that people who oppose him tend to disappear or die.  "He's a nice guy," they say.  They think he wants to be friends, best buddies, our BFF.  And they are so damn stupid.
Right now the US is the most powerful nation on the planet, something which makes The Vlad sweat with jealousy.  His envy is almost palpable, and if given the chance, The Idiot in the White House will play into his hands, be his eager tool, he wants to emulate his idol, no matter what the costs. 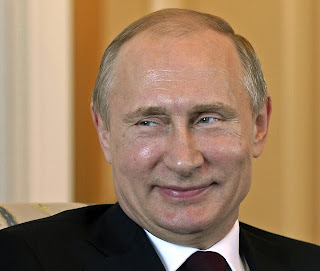 I didn't read everything The Vlad said yesterday at a 3 hour forum, but the excerpts I did read were tainted with subterfuge intended to guide some Americans into a guilt trip; we are the culprits.  A high school student could have hacked the DNC.  It was American hackers trying to make Russia look bad.  Obama may have made decisions without getting all relevant data. Trump is wiser.  Holy Shit!  Very subtly, The Vlad tried to reinforce the idea the that We Are The Problem.
No.  We are not the problem.  We are the solution to the problem.  We are a Democracy dealing with the temporary flatulence of The Idiot in the White House, and as such, he too will pass much to the dismay of The Vlad.  I do not doubt that at some point Americans will toss his very words back into his face:  Don't Worry, Be Happy!
Posted by Dave R at 7:45 AM