Blood on the Ax

So, I have a blister on my left hand, right below the middle finger, the result of digging out a 20 year old lilac bush from the corner of my front yard.  In the 5 days I have off, that was one of my main goals.  And like all things blistery, I suspected I was growing one as I hacked away at the roots with my 20 lb, heavy duty pick.  When I looked down and saw there was blood on the ax, I knew I'd be reaching for the band-aids and Neosporin shortly.
And in case your wondering, the blood on my ax was much more real than that on the ax Newt Gingrich sought to grind yesterday.  Every member of Congress was bending over backwards except for this horse's ass who blamed the Democrats, on Fox News, a right wing propaganda channel that  no longer claims to be fair and balanced. Yesterday, when there was serious bipartisan concern, numb nut Newt started spitting out turds, no doubt to get himself some attention.  What a loser.  And this morning, as I glanced through the comments by some of my Navy buddies who are lost in the school of conservative foolhardiness, I could see that he was not alone.  They all have their little axes to grind. 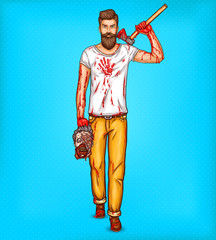 And, of course, there was so much brouhaha going on about the shooting, many failed to notice that the Washington Post noted that evidently there is an ongoing investigation of the Idiot in the White House.  Of course, it's the big news today.  Obstruction of Justice.  Happy Birthday Idiot.  And, as you might expect, he started chopping away on Twitter.
Anyway, I think that tomorrow morning Big Seig and I will head over to Home Depot and pick out something to plant where the lilac bush once grew - something that's not going to grow too big, or too wide, like maybe a shrub.
Posted by Dave R at 11:22 AM