So this is my 4th day off out of 5 in a row.  I was going to take Big Seig along with me to Home Depot to pick out a replacement shrub for the front yard but didn't because they were calling for rain - good thing, Home Depot didn't have what I was looking for, so I went to Lowe's, they didn't have what I was looking for either.  Shit.  I'm zeroing in on buy a smoke bush, which is actually more like a small tree, and nobody seems to be carrying them locally. 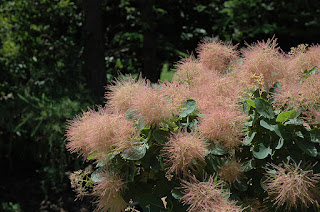 I may have to order it from some place online.
Also, I guess the Idiot in the White House has Tweeted infor regarding the investigation into his firing of Comey,.. which is funny, because I guess this is just one of many investigations that are now Ongoing, which is rather humorous, to say the least.
Just because there happens to be so much smoke, well, that doesn't mean they're going to find anything burning.  Seeing that Mike Pence has also now chosen to hire a private counsel, one that has connections to both the Iran Contra investigation, as well as the Watergate investigation, isn't exactly the kind of declaration of innocence you would expect from our Crazy Christian VP, is it?  Of course, maybe he's just covering all of his bases.  Just in case, you know, he may actually be a little bit on the guilty side.  That would be funny, too.  Conservative corruption is not new.  Smoking guns seem to always turn up, in fact there seems to be another Deep Throat around every corner.
I also get a good laugh at the Administration's expense on their complaints about leakers.  Maybe someone should tell these morons that this problem wouldn't exist if they didn't have anything worth leaking.