Just a quick note before I slip off to work... I saw that Newt Gingrich is opening his crazy, trash mouth saying things like "we should test all Muslims to see if they believe in Sharia," and I'm thinking to myself that believing in Sharia doesn't make one evil, and it doesn't make you a terrorist.  Of course Newt doesn't care about this.  All Newt wants to do is throw red, juicy, raw meat to the GOP base, he wants to spoon feed the Trumplodites.  It's a terrible thing to say but I think the Republicans need the the Muslims the same way the Nazis needed the Jews, as a focal point for hatred, and Newt is a mouthpiece.  And you can bet he's loving this, creating a palpable threat. 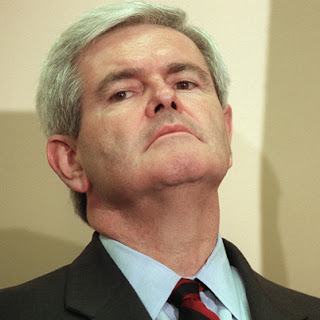 He is one of the villains in this piece of Trumplomania.  They don't really care who gets hurt, just as long as they get someone in the White House.  They want to make America great by branding it in their own likeness, very white and dressed in their version of Christianity.
Posted by Dave R at 7:12 AM