Last night I was supposed to work an overnight, I didn't.  The night before I condensed 8 skids of 5 gallon buckets down to two skids, putting about 30 buckets out on the floor, and all of that weight stretched my arthritic back a bit too much.  Yesterday I was real sore.  So, I took off last night.  I watched Hillary's speech.  She's a good speaker, not great.  She gets her point across with out adding any frills. Some people like the frills, I don't.  Be plain spoken, be brief, and get it done.  She did a fine job at attacking Trump.  I got a big laugh from the line about baiting him with a Tweet.  I suspect that will be one of the avenues of attack.  They are going to bait him incessantly.  I can already hear her, during one of their debates, calling him Don.  How fast would that knock him off point?
As the camera panned over the crowd to focus in on Bernie Sanders I could only wonder why no one had told him he needed to pull that bitter stick out of his ass.  He is one angry old man. 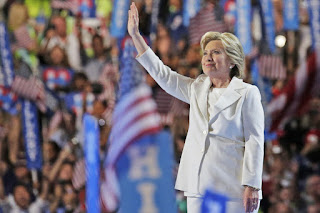 And speaking of Hillary, she's going to be in Harrisburg tonight.  In fact, as the crow flies, she's going to be about 2 miles away from my house.  I'm not going.  Eight years ago I went downtown to see Barack Obama speak from the steps of the state capital.  Believe me when I tell you that was a magic moment.  Not that tonight isn't going to be magic.  I'm just older and don't want to deal with all of the traffic.
On an lighter note, I saw where Melamia Trump's website was taken down.  Evidently she has a lot of veracity issues, especially regarding her academic background.
On an even lighter note, Donny Trump, Jr, complained that Obama had plagiarized some of his father's speech.  Evidently he didn't realize Obama has been using that phrase for years.... hhhmm, obviously this egg didn't hatch far from the nest.
And for poll watchers, now you can start to watch them, but always take them with a grain of salt.  Remember, Republican polls showed Mitt Romney winning big.