Is Trump the Herald of Death

Well, I looked at my  schedule for 3 weeks out last evening and groaned.  I'm scheduled  to do a closing followed by an opening which means I have 7 hours off between shifts.  Crap.  That's not enough time, so I sent out a text and was told the 'error' would be fixed.
Yesterday I also posted a link to this video of Trump saying he wanted to hit people onto my Facebook page.  In case you haven't seen it, take a gander.  And I received several comments, one of which implied that Trump is not used to the political stage and therefore unskilled when it comes to censoring his comments.  Well, that's bullshit.  He's a 70 year old business man who's used to saying things like "do it," "shut up and give me what I want," and "don't pay them."  He loves to say things like "you're fired" because he loves to dictate.   His whole approach to this election cycle proves he doesn't know the difference between a president and a dictator.
Now I know there are people who love him for this, but there are many, many more who don't.  In fact, I suspect that quite a lot of them are questioning whether he might not actually be the Herald of Death.  Me?  I think he is.  Not for mankind, or the human race, but rather for the Republican party.  Even the crazy conservative Koch brothers want little to do with him.  They know he's poison.  He is loudly barreling through their tightly woven conservative world like Godzilla through a cardboard Tokyo.  For them, for the GOP, and for the conservative movement, Trump is the Herald of Death. 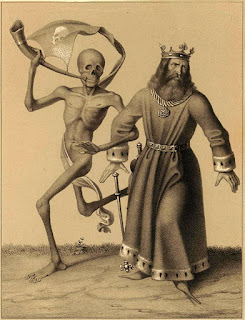 How sad, I think it is, that there are so many Republicans who find themselves enraptured with him without understanding that they are nothing to him.  When he says he's created thousands of jobs, they don't get the connection that those jobs are in China, and Mexico, and Honduras.  These Trumplodites will be so smashed after he loses the election they will never vote again.  His loss is going to hit them so hard their heads will spin, and they will never recover.  For all of those people, he is the Herald of Death.