Dead Elephant in the Room

Well, the Republican Convention is over... as is the Republican Party.  That's right, there's a dead elephant in the room.  No matter how much they tried to and pretty up the smell with snazzy visuals and loud music, there were cadavers lying  everywhere.  Not that I watched any of it, the daily headlines said everything.  The word 'disaster' appeared quite a lot.  Instead of having legitimate speakers they had... well, nobody of any real importance, no one who had any  real political sway.  They couldn't even manage to get Clint Eastwood and his chair.  And still, the Trumplodites went wild.
Trump's pick for VP, Mikey Pence, gave a speech and might as well have been talking to the wall because everybody was talking about Melania's plagiarism.  That was really funny, a lot of verbatim phrases from Michelle Obama's speech, and they thought no one would be smart enough to pick up on it.  They think Americans are so dumb they didn't even run that speech through plagiarism software.  But then you have to remember, Trump didn't buy her for her brains, he bought her for her looks.
And then there was Ted Cruz....  Let's just key the theme from Psycho and leave it at that. 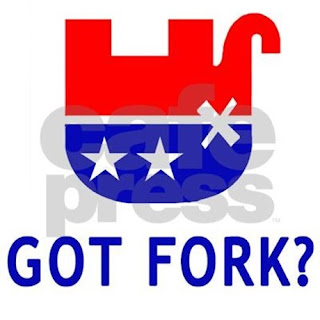 Caitlyn Jenner spoke... who cares.  Well, at least he spoke, of course it was during lunch hour and there were on a smattering of people in the hall.
So did Peter Thiel, who is an openly gay man.  He also doesn't seem to understand that if those people in the convention hall, sitting on their hands, ever truly got into power, they would not only pass laws to take all of his money, they'd pass laws to put him in a concentration camp with all of the other gay people in this country.  He doesn't understand that in their socially conservative view, he is the enemy.
In the four nights the Republicans were in Cleveland there was no unification of the party, and though they like to pretend everything is happy dappy, mostly what they did was stab themselves in the back, over and over and over again.  I am so glad I'm not part of the clean-up crew.  What a bitch it must be to find a dead elephant in the room.