Today's my day off.  So what if it's Sunday, I've got a full day planned: mowing the lawn before it rains, cleaning and dusting (I've already cleaned the bathroom), picking up 18 pavers (I'm having 3 tons of pea gravel delivered on Wednesday), and a trip to the movies this evening.
Anyway, since to day's Sunday, I thought I say a couple things about Religion.  Last year the Pew Institute came out with their report on world religions.  A lot of Christians were not happy because Islam is over taking Christianity by leaps and bounds.  This is how things go.  Three thousand years ago if you'd told your average Roman citizen their gods would be usurped by a monotheistic religion they'd have called you stupid.  Twelve hundred years earlier, had you said the same thing to an Egyptian, they would have thought the same.  Three thousand years ago, had you said the same thing to a Hindu he would have laughed because they're still around, in fact there are about 1.2 billion of them.  They are the world's 3rd largest religion.  Interesting. 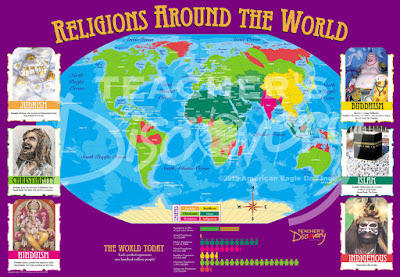 I suspect that two thousand years from now another religion will be taking over the planet, one which is more philosophical and doesn't rely on an end of times.  I always thought that was a mistake, you know?  Revelations?  The more centuries that pass without an apocalypse the weaker the religion grows.  I'm not going to be around in two millennia, but I'll be honest, I'd be interested to see how the advent of space travel and longer life spans effect faith.