I went to see Paul McCartney at the Hershey Stadium on Tuesday.  The show was... tremendous; lots of Beatles songs.  He did an original Quarrymen song.  For those who don't know, originally the Beatles called themselves the Quarrymen.  They put out an album, too.  If you own a copy of that original album, well then Baby Your a Rich Man.
Traffic going then wasn't that bad.  Leaving was another story - an hour and a half to go 21 miles....
Anyway. as I said the show was unbelievable.  And I'll be honest, there were moments of almost overwhelming nostalgia, like when, sitting at his grand piano, he quietly said "I wrote this for Linda," and played  "Maybe I'm Amazed."  Then there was the tribute to John Lennon, in it he said "if you want to say something to someone, say it, because you never know when they'll be gone and they'll never know what you want them to know."
It was far louder than I was expecting, which was a good thing.  We can all use a blast of voluminous music every now and then to shake up our bones.  Let me tell you, Paul McCartney is pretty spry for a 71 year old man, and you can still see hints of the pretty boy he once was.  He was always my favorite.
Oh, and they pretty much blew up the stadium with "Live and Let Die." 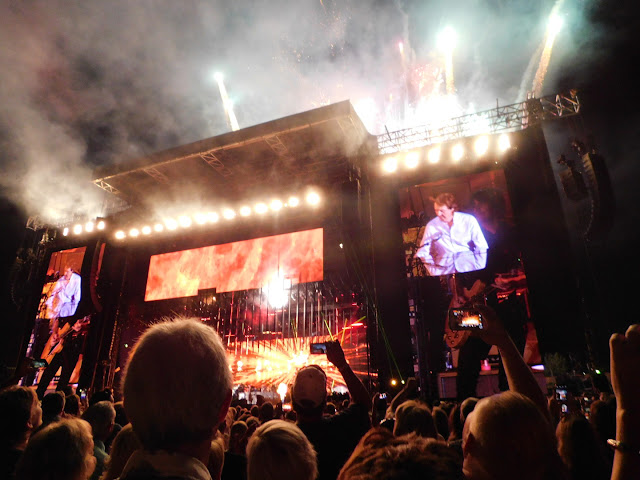 Yes, there were fireworks.
And fireballs shooting up from the front of the stage.
And explosions.
Oh, and I also bought a T-shirt.

Email ThisBlogThis!Share to TwitterShare to FacebookShare to Pinterest
Labels: Hershey Stadium, one on one tour, Paul McCartney