Well, here it is Independence Day and, of course, I'm working.  The store closes at 8 and I'm scheduled to work until... 8, lucky me.  There a people who are scheduled to work until 9.  I am off tomorrow, which is nice, and nicer still, I'm off Wednesday as well, of course, then I have to work for 7 days straight.
Anyway, I thought I'd celebrate the day by sharing a bit of my memorabilia.  I once worked for a store manager who commented that he thought I might be a hoarder.  I'm not.  I tend to give stuff away.  When DVD's came out I gave away all of my VHS tapes, as well as a very expensive Harmon Kardon player.  I did, however save one thing and it just happens to be from Independence Day. 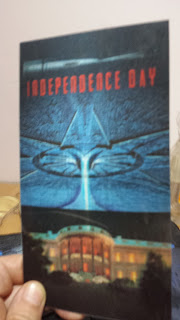 That's right, it's a holographic card which was included in the VHS packaging.  That's from 1996.
And there's a message on the back from Dean Devlin and Roland Emmerich, part of which says "Now, and in the years to come, we hope you and those close to you will have the opportunity to enjoy this film over and over again."  Right.  I bought the tape, not because I thought the movie was great, I'm just a big fan of very big FX.
Anyway, when you turn the card a little bit too the right this is what happens: 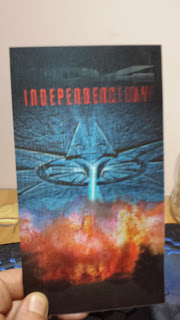 That's right, Trump win the election.  I'm going to see the sequel on Tuesday.  I understand one of the Hemsworth boys is in it, which means there's going to be a 20 second gratuitous shot of him with his shirt off.  You know, I bet that if he'd played Tarzan he'd have taken of his pants.