Tonight I get to work the first of two overnights, it will be my 7th day working without a day off and so I'm tending to be be a bit cranky about things.  Like my new Ipod arrived yesterday.  My old one is sitting on a shelf locked up in Ipod hell.  I had the same problem with the first Ipod I bought - it played great for about 2 years and then.... nothing.  It wouldn't play music, wouldn't sync, what it did do was lay there daring me not to throw it out.  I threw it out and got myself a nice new one - lime green.  That one worked well, too, until the Imac it was linked to self-immolated, then, for some reason Apple couldn't explain, I could link it to another computer, but I couldn't add new music.  My 3rd Ipod was stolen.  I left it in my locker at work but didn't lock the lock.  Eight hours later it was gone.  We know who the thief was, he was relaxing in a recliner five feet away from my locker however, because there was no direct proof, nothing charges could be filed.  Interestingly, 2 weeks later he walked off the job.
My 4th Ipod is also daring me not to throw it out.  After about 3 years, it too has stopped working.
Now I'd said I wasn't going to buy another one since I'd like to get more than 3 years service from my purchase.  But then the other night I started looking around on Amazon.
Number 5 arrived yesterday.
It's an Ipod Touch... and it's gold. 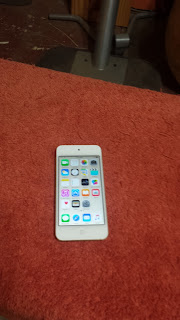 And it's filled with software I am never going to use.  Maybe the email, and the weather and possible the clock, but Siri?  Give me a break.  Now, all I have to do is wait and see how long this one lasts.
Posted by Dave R at 8:25 AM