A tale of 2 Indians

We have a large Indian population in Harrisburg and for the most part, they are very nice people.  In the evening there are usually more Indians in our store then any other minority.  I have an Indian associate working for me named Ved, he's a good kid.  A lot of times they will stop by the paint desk and ask us questions like: "how do you fix a broken rung on a futon?", or "can you help me fix a leaking water heater?"  We always get them to the correct departments since none of my people can solve those special issues.
On Tuesday we had two Indian gentlemen come to the paint desk with 3 gallons of paint, one of which was old, the other two newly tinted.  They were upset because they'd been to one of our other Harrisburg stores and had gotten what they felt was really bad customer service.  Their problem (and let me tell you they were really upset)?  The paint in the old can, which had been color matched in 2009, no longer matched the color on their walls.  Hey, sunlight will fade the paint on your walls, if you don't clean you walls the color may change, most people don't know this, but it happens.  Because the original can had been mixed in 2009 neither the colorants nor the formula were valid.  Things change.  And the associate at the other store didn't do a color match, the logical solution.  Nope, that person, who ever he/she was, tried to take the old formula and convert it into something which would work.  It didn't. 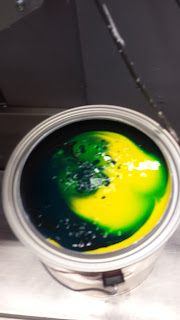 The original color, tinted in 2009, was a mustard yellow, the 2 gallons of new paint were a purplish taupe.  Not even close.  And these two gentlemen left that store in a very agitated state and brought their ire to my paint desk and we had to solve their problem.  We ended up giving them a credit for the two gallons.  We also color matched the original 2009 paint and mixed 2 new gallons, one of which was complimentary.  Because an associate at another store did a shitty job, I ended up writing off 3 gallons of paint.  If someone is willing to spend money in your store, make sure you give them their money's worth.