Isn't this bullshit down in North Carolina pretty much of a hoot?  They passed HB2 for 2 reasons:
1.Those Republicans down there are pissed at the Supreme Court and 2. Pat McCrory, the Republican Governor, is in a very tight race to get himself re-elected.   The last thing those Republicans want is a Democratic Governor, and what better way to help move the campaign in their direction then to rally their base.  And what better way to motivate those voters then to pass a controversial bill that not only takes away the rights of LGBT people, but makes it impossible for them to ever achieve those rights.  Did McCrory understand how big a stink this bill was going to raise?  Of course.  That's the politics, you see.  He wants every registered, socially conservative voter to hit that ballot box.  Does he care that he's trampling over human beings and their rights?  Hell no.  This is all about keeping his ass in the Governor's chair. 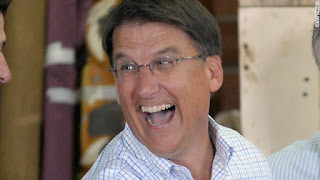 Did he totally underestimate the negativity this HB2 would create?  Absolutely.  Yesterday he started falling back on the trite rhetoric the GOP use to consistently imply their victimization.  It's a smear campaign.  Right.  More likely it's the death knell for his campaign.  Do voters really want a Governor who doesn't really care about the number of jobs large corporations bring to his state?  Do they really want to give tax breaks to those same corporations if they slow down their hiring of North Carolinians?  I thought it nearly hilarious when one of those yokels voting for this bill said it would be good for business....   Yeah, some moron actually said that.  Pat McCrory is a bad news governor; bad for the people and bad for business.