And so we're moving into day two of hard core inventory prep.  I got some sleep last night, tonight I'll get little.  Not that it's all work and no play - last night there was some humor.  You see I was one of several people measuring molding since it's inventoried by the foot.  And the manager from that department was working with us and she was very gung-ho, even though she's way behind in her prep work, which means every one else is helping her catch up.  She was so serious in her ambition to get things done, saying "I'll stay until 4 in the morning if I need to," myself and two of the other managers helping her catch up just smiled to ourselves.  You see, this manager is going to be terminated.  That's right, fired.  And not just because of her shitty performance.  Nope.  She's been coached many times on her inability to show up on time.  This is a weekly occurrence.  The paperwork is already filed.  They just need to sit her down and hand her the tissues.  This is life.  It's called responsibility.  Sadly, she will not be missed, and that's a shame.
Anyway, while measuring her trim and molding last night, (now doesn't that sound kinky) I managed to get 4 splinters. 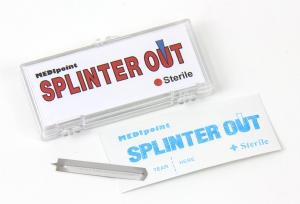 Three teeny weenie ones and one that was about not so teeny.  The kitchen manager told me I should be wearing gloves, but I pretty much shrugged off the comment.  You see, there are ways of getting rid of splinters.  Sometimes they work themselves out.  Sometimes you need to use a tweezers to provide a little incentive.  Occasionally you need to use a sharper tool.   Either way, it's not that difficult to remove them.  Like the manager who feels she can set her own schedule.  No matter what type of splinter you're dealing with, they are usually problems that are easily fixed.