International Paper pays me off

While my employment with xpedx, the distribution subsidiary with International Paper wasn't rocky, to was quite stormy at times.  I was hired by them about 20 years ago into a low level management position.  Six years into my tenure a higher level position was created, and with my experience I was considered a shoe-in by the people who worked for me.  It was a nice position, $16,000 a year increase, nice job description... and they gave the job to a woman who'd been with the company just a little over a year.  And she turned out to be fairly incompetent, so they created a new job:  AP/AR Liaison Manager.  It was considered a later move for me so they moved me into it and I now had her responsibilities.  She would go out to her car at least once a week and cry because she was so overwhelmed.  Eleven months later she handed in her notice, unfortunately her position was no longer needed since I was already doing the job.  Believe me, AP/AR Liaison Manager doesn't do a thing for your resume.
Four years later International Paper decided it would be more fortuitous if xpedx outsourced the majority of its accounting positions to a company out of Krakow, Poland.  And they bought in the Poles so we could train them to do our jobs.  And I had to sit in on conference calls to help them fix their mistakes.  They did give me a nice severance package, which was nice, but the country had just feet first in the 2nd worst financial crisis in our history and nobody was hiring.  And I thought, hey, I'm shit out of luck.  But then things turned around, karma started kicking in.
I got an entry level Human Resources position with the retail giant I work for, based mostly on my years of Payroll Management.  And then 2 years ago I got a nice check in the mail for International Paper. 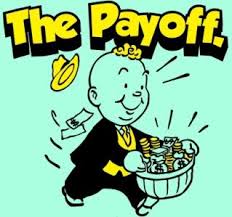 Evidently they'd been illegally skimming money off of my 401k deductions.  They didn't take the time to fight the lawsuit, just pretty much wrote me a check.
For the first 3 years I'd been employed with IP, I'd been part of a pension plan.  A plan that was no longer offered when the 401k was offered.  Still, I was a participant... for three years.  Last week I received a letter from IP - they're going to do a one time buy out for certain people.  I called a friend of my who also worked for xpedx and he said "take the money and run."  We both think this is the prelude for IP eliminating the plan completely.  So I jumped on board.
On June 30 they will cut me a check for thousands.. and thousands.. and thousands of dollars, in fact, around $30,000.  You see this is their payoff.  It's part of their karma.  The mistakes that they made are being fixed.